How life under a theocratic government, upbringing in a Marxist-Leninist household, and the U.S.-led invasion of Iraq turned a young man into a neocon.

I am the product of an Islamist government, a confused society, and Marxist-Leninist parents. April 9, 2003 helped clarify who I am.

I was 13 when I watched Saddam Hussein’s grand and ghastly statue taken down by U.S. forces at Firdos Square in Baghdad (it had just been erected in honor of the Iraqi dictator’s 65th birthday). I had spent my whole life in Iran, a country with a government essentially as violent and oppressive as that of Iraq’s. Watching Saddam Hussein’s demise gave me hope that I was not damned to live and die in a totalitarian state—that if Iraq could change, perhaps Iran could too.

Living today in the United States makes me realize how unusual  my path has been.

My mother was a young activist for the communist Tudeh Party before she was sentenced to five months in prison for her politics. My father was a prominent Marxist intellectual and an established figure in the same party. He also went to prison and was tortured for five years. He did not discuss his views in public after that, for fear of being sent back to prison. But he did discuss them with me. I was expected not just to listen, but also to ask questions and occasionally opine.

My family’s political background meant that there was a greater focus on us, which required greater caution. I went to school with all kinds of kids—religious, not-so-religious, political, apolitical. Most were confused, and all looked purposeless. You would go to school and then college to become an engineer or a doctor. You would get married and have children. You would work to provide for that family. There was no meaning to life beyond that, and nobody asked for it.

Something else that was common in the upper-middle class community where I grew up was grievances against the regime. They existed in a variety of forms and scales, but they were there. For my family, who had been persecuted by the regime and whose many properties had been confiscated after the revolution, it all came down to one thing: Dictatorships were bad.

Of course, as far as communists like my father were concerned, the United States was just as much a dictatorship as Iran. My parents told me about what the Americans had done to the Japanese during World War II, how black people were treated in the United States, the horrors of Ku Klux Klan, and how filthy rich some U.S. citizens were. The last point never sounded so bad to me. After all, my grandfather had been filthy rich before the revolution, and I wanted to be rich too!

The image of the United States was much worse outside the house. America was the Great Satan, responsible for all the ills in Iran and around the world.

Then came the September 11 attacks. I was only 11 when it happened and too young to grasp the enormity of the event. What came after is a different story. George W. Bush—supposedly the evil leader of evil America—stood up and said that the attacks had happened because the Middle East was not free. To prevent future attacks, the United States would bring freedom and democracy to the region. He spoke of how peoples in the Middle East were being mistreated by their governments. As the discussion turned to Iraq, it felt like he was talking to me. Everything he said resonated. The Islamic Republic and Saddam Hussein’s Ba’athist regime might have been decades-long enemies that fought a bloody war, but both oppressed their own peoples in more or less the same fashion.

The more President Bush talked about exporting democracy, the more I wanted to be a part of his nation. A nation that believed that its interest was aligned with the freedom of others was the only nation worth being part of.

I couldn’t live in the United States, of course, so I had to settle for the smaller joy of following its politics. I didn’t know much about how Republicans and Democrats differed, but I knew I was a Republican because Bush was one. As I explored democracy promotion on my low-speed internet, the term “neoconservatism” kept popping up. Neoconservatives, I learned, wanted to expand the reach of human rights and democracy and were not shy about using America’s military force.

The predominance of Jews and support for Israel among the neoconservatives did not bother me at all. I never minded Israel. What I didn’t like was the Palestinians’ receiving aid from Iran while Iranians were starving. I had never met a Jewish person, but the regime hated Jews, so I grew to love them out of spite for the regime.

As I dug deeper, I came across names like Paul Wolfowitz, the Kristol family, Elliott Abrams, Scooter Libby, Eliot Cohen, Eric Edelman, Doug Feith, and the Podhoretz family. By the time I was 19, I had become fluent in English and could read their writings. I also came across think-tanks like the American Enterprise Institute and the Hoover Institution. The more I read, the more I liked neoconservatism.

Learning more about America was a double-edged sword. It gave me hope that life could be better, but it also made me realize just how much I was missing. Growing up in Iran was bad enough, but the situation had worsened under Mahmoud Ahmadinejad. As the presidential election of 2009 was coming up, I joined an army of young people to campaign for Mir Hossein Mousavi, who was running on an anti-hardliner platform. When Ahmadinejad was declared the winner, we all knew the election had been rigged.

What happened next is remembered as the Green Movement. Just a few days after the results were announced, millions marched on the streets of Tehran, joined by compatriots in other cities, demanding their votes to be counted. Protests continued for over a year. As the protests downsized, violence rose.

The Green Movement gave me a purpose. For the first time, the selfish and angry society that I had grown up in had become friendly and community oriented. It was not just me. Everybody was happy, everybody was mindful of their fellow protestors. It was a surreal experience.

As we peacefully marched on the streets during the day and violently clashed with security forces at night, we saw all kinds of foreign peoples and governments, from national to municipal, providing us moral support. We were throwing stones at the security forces, as they shot at us and threw tear gas. The Italian embassy opened its doors to protestors. If you had been injured, they would issue you a visa on the spot to leave for Italy. The Florence city council hung a green flag outside its building.

But President Obama remained silent. He wanted to negotiate a nuclear deal with the regime and did not want to sacrifice that objective for the cause of democracy and human rights. As we chanted, “Obama, either with them (the regime) or with us,” we did not hear back. We told each other, “Bush would not have let this happen. He would not have done this to us.”

The protests eventually died, and Iran returned to normalcy, but my life had changed. My involvement with the protests had gotten me expelled from college, which I happily saw as my ticket out of Iran. I spent the next thirty months in Budapest, Hungary, where I befriended several foreigners, most of them Israeli. I learned how it felt to talk without self-censorship in public, to drink alcohol without any fear, to flirt with and kiss women in public. But I also understood, there and everywhere else in Europe, that I was not one of them. I was a foreigner.

Assimilation into Hungarian society was impossible. I was living in the Jewish corner of the city. Once, going home at night, a young Hungarian guy locked eyes with me as we were passing each other and spat on me. My friends and I never figured out whether it was because he thought I was Middle Eastern or Jewish. What’s the difference, anyways?

Language barriers made assimilation more difficult, of course, but there were also cultural differences. I was trying to enter a monolithic society with centuries of established culture and a strong sense of national identity. The feeling that I was out of place remained more or less constant in my travels across Europe. People treated me as a foreigner, sometimes in the kindest and most curious ways, sometimes with hostility, but never neutrally.

The single best moment of my life happened on May 17th, 2014, when I set foot in the United States for the first time. I had a student visa in hand and an admission to Arizona State University. My first interaction in the United States was with a gentleman waiting for his connection flight in Chicago O’Hare airport with me. I told him that I was going to start college and stay in the United States. He was very quick to mention that “this is the country of immigrants.”

Now that I was in the United States, I began practicing democracy. I became a member of College Republicans and volunteered for Jeb Bush’s, John McCain’s, and a few local campaigns. I started reading conservative journals, including The Weekly Standard and Commentary. I got involved with student organizations such as The Alexander Hamilton Society, AEI for Students, Hertog Foundation, and Tikvah Fund. Under their guidance, I studied conservatism and neoconservatism more deeply. They taught me that United States was not a non-profit dedicated to human rights and democracy, but rather had an interest in (and tradition of) promoting them.

So, what does this neoconservative from Iran, raised by Marxist-Leninist parents, think of regime change in the country in which he spent most of his life? The truth is that the term “regime change” has itself become a strawman. There is a middle ground between a ground invasion to promote democracy (which was not the Iraq War’s purpose anyway) and doing nothing. Democratization must come from within, yes, but it can’t always happen without foreign help. After several attempts by the Iranian people, it is now clear that the regime is too powerful for the people. We can begin with supporting labor unions and dissidents who are trying to make change happen from the inside.

In their correspondences with each other, James Madison and Thomas Jefferson called the United States an “empire of liberty.” The reason American imperialism is so successful and stable is that its participants benefit from it—because most peoples would rather live in the free world that America leads than in Iran, and because the benefits of friendship with America significantly outweigh those of animosity with America.

Thomas Paine was right when he said that the cause of America is, in a great measure, the cause of all mankind. America possesses many powers, but its power as a cause is the cheapest to spend and yet the most valuable and impactful. This is something many of my friends and fellow students find bewildering. If only they could visit Iran. 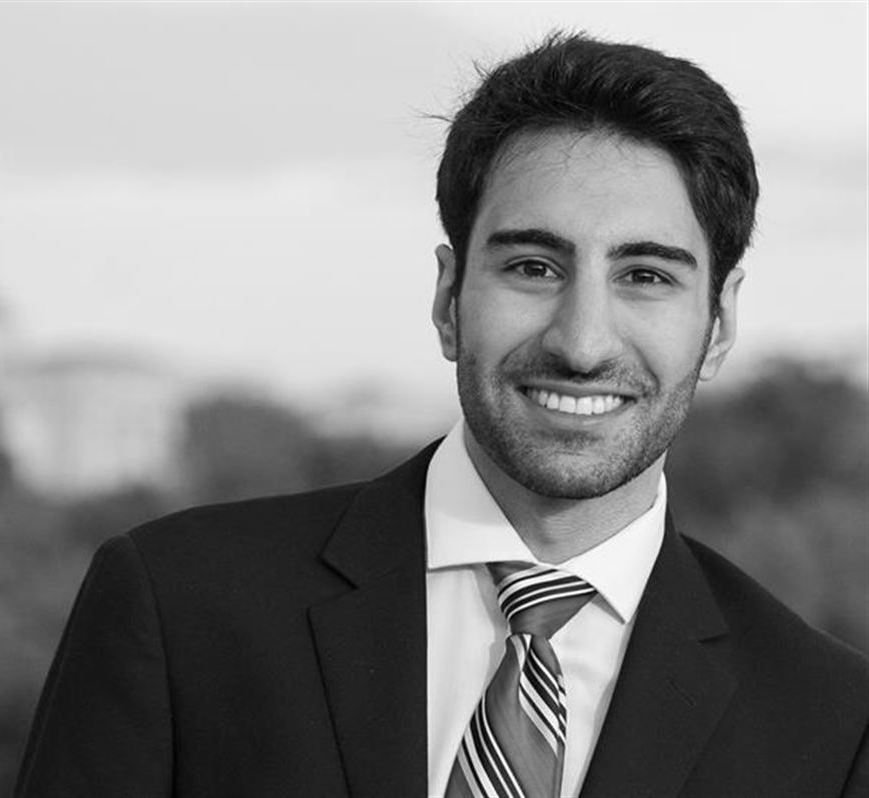